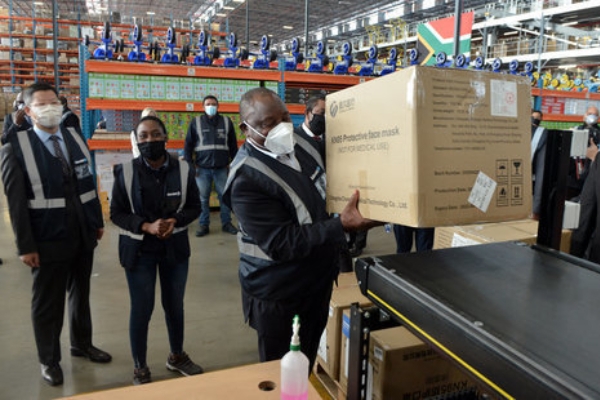 South Africans donated billions of dollars to protect key workers. But with bank accounts frozen and sports cars seized, questions are being raised about where the money went.

What started as a rallying call for South Africans to stand together against the onslaught of the coronavirus pandemic, quickly disintegrated into a morass of bureaucratic bungling, corruption and outright looting involving multi-million-dollar tenders allegedly awarded to politically connected individuals tasked with supplying personal protection equipment (PPE).

He called on the people to be resolute and firm and to support the government’s decision to declare a national state of disaster, and lockdown the country for three weeks.

He also announced the creation of the Solidarity Fund – with an initial R150 million ($8.7m) from the state – to deal with the coming Covid-19 storm.

The speech, delivered with gravitas and frankness, shifted even his most fervent detractors, and the money poured in.

The families and businesses of the Oppenheimers, the Ruperts and the Motsepes immediately committed R1 billion ($58m) each.

Online internet giant Naspers kicked in R1.5 billion ($87.5m). Two-thirds of the cash was used to source, procure and distribute PPE and the remaining third paid directly into the fund.

Within weeks, the fund had attracted $30bn, and within six months some $142m had been disbursed on what the fund listed as ‘interventions and projects across three key pillars – Health, Humanitarian Relief and Behavioural Change’ – with huge sums spent to provide PPE for frontline health workers.

As the country moved into ever-decreasing alert levels, the regulations surrounding the lockdown became submerged in illogic and nonsense.

Retailers could sell T-shirts, but only if they were to be worn under a jacket; they could not sell open-toed sandals; the Department of Trade, Industry and Competition even placed absurd restrictions on e-commerce shopping.

The mood of the country shifted from determination and support to anger and disillusionment.

Then stories began to trickle in about the PPE contracts.

A month later, Lehloenya resigned, and Pino was suspended while the SIU investigates her role in the tender awards.

But the alarm bells went off in July when presidential spokesperson and confidant Khusela Diko was placed on leave following revelations that her husband, king of the amaBhaca people Thandisizwe Diko, had secured a $2.75m PPE contract.

By the end of July, the deal – which Diko withdrew from – along with more than 90 other tenders issued by Gauteng’s Department of Health, was being investigated by a nine-institution unit headed by the Special Investigating Unit (SIU).

The SIU was set up by the President on July 23 to deal with allegations of PPE corruption.

The probe into Khusela Diko, which includes the Gauteng health minister, Dr Bandile Masuku, and his wife, councillor Loyiso Masuku, has yet to be resolved, despite a marathon two-day hearing held mid-September.

Questions really began to be raised, though, when a young businessman by the name of Hamilton Ndlovu posted a video showing him taking delivery of five luxury vehicles – three Porsches, a Jeep and a Lamborghini Urus SUV – worth roughly $645,000.

At the time of going to press, Ndlovu’s bank accounts had been frozen and three of the cars seized pending an investigation.

By mid-September, the SIU was investigating more than 658 PPE tenders and other pandemic-related contracts worth around $300m.

This investigation followed on reports from the South African Bureau of Standards (SABS), which revealed that approximately 60 per cent of the medical-grade masks it tested did not meet its quality criteria.

Ironically, the Hawks are also involved in investigating themselves after it came to light that four contracts worth $31.6m to supply the police with PPE were under investigation.

The rot seems to be widespread. In the province of KwaZulu-Natal, the SIU is looking into the Department of Education and the Department of Social Development’s PPE contracts respectively valued at $28m and $1.25m.

According to a report issued by the Auditor-General, Kimi Makwetu, the items were ‘priced at more than double, or even five times, the prescribed price’.

It goes on to say: ‘There are clear signs of overpricing, unfair processes, potential fraud and supply chain management legislation being sidestepped’.

The Auditor-General’s final report is expected in November.

It will be his swan song, as his seven-year term of office comes to an end.