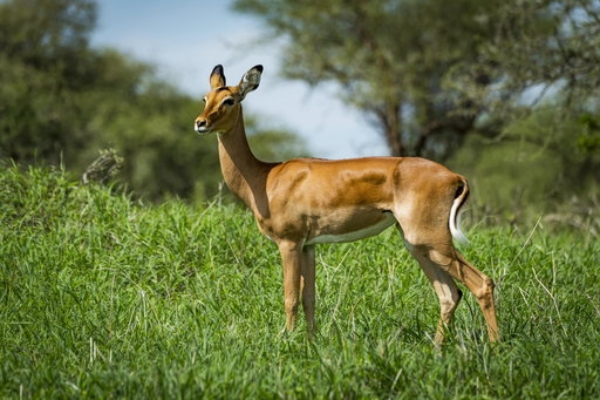 In the crosshairs: Tanzania's wildlife could be at risk thanks to bushmeat legalisation. PA Images
Rate this item
(0 votes)

With poaching on the rise thanks to the pandemic, Tanzania has alarmed conservationists further by legalising bushmeat markets, writes Zachary Ochieng.

The Tanzanian government has decriminalised bushmeat markets as part of an unusual strategy to control poaching in the East African safari hotspot.

The opening of the first butchery in the capital Dodoma in late-December followed President John Magufuli’s 2019 calls to open game-meat selling points across the country in a bid to stop illegal hunting.

An estimated 2,000 tonnes of meat, worth $50 million, is illegally caught and sold in Tanzania each year.

Explaining the strategy, Tanzania’s former minister for Natural Resources and Tourism Hamisi Kigwangalla said: ‘Tanzanians who wish to open such butcheries will be given special licences to run their businesses while the harvesting of game meat will only be done by professional hunters.’

But conservationists are concerned that legalised bushmeat sales in Tanzania will drive an increase in poaching, both within Tanzania’s national parks and reserves and outside the country, with meat smuggled into Tanzania to be sold in its new legal markets.

She explained that as the animals become increasingly aware of the threats in Tanzania, they will venture over to the Kenya side – and ‘where they go, bushmeat poachers will follow’.

‘An increase in poaching threatens Kenya’s fragile environment and could have dire consequences for its biodiversity,’ explained the environmentalist, whose parents, David and Daphne, famously led Africa’s efforts to save the elephants.

‘Already, we are grappling with a significant rise in illegal poaching brought on by the Covid-19 pandemic. The added pressure of legalised bushmeat poaching next door could push our conservation efforts to the brink.’

It’s not just Kenya that has reported an uptick in poaching since the Covid-19 lockdowns.

The Uganda Wildlife Authority (UWA) announced that there had been 367 poaching cases between February and June last year, compared to 163 in the same 2019 period.

Its director for conservation, John Makombo, blamed the increase on the coronavirus lockdown, which not only cut local income but the UWA’s ability to patrol conservation areas.

Yet despite the economic hardships resulting from lockdowns, Sheldrick believes legalising bushmeat is not the answer, and said the demand for bushmeat will always outpace any sustainable quotas set on hunters and butcheries.

She also warned that such moves would threaten Africa’s biodiversity, placing its natural inheritance – so important to the continent’s tourist industry – in jeopardy.

The threat posed by bushmeat hunting is a matter of increasing concern in Africa’s wildlife areas.

In Tanzania, where more than 11,800 people have been arrested in the past four years for poaching inside game reserves, the problem is intensifying, and research has already established that wildlife populations across different ecosystems are contracting.

‘Bushmeat poaching has become the most pervasive, immediate threat we are dealing with on the ground,’ warned Sheldrick.

‘In 2019, we confiscated 5,026 snares from the Tsavo Ecosystem [which straddles the Kenya-Tanzania border]. In 2020, we confiscated more than double that. The numbers confirm the story we already know: bushmeat poaching is on the rise.’

Other than being a threat to biodiversity, the consumption of bushmeat also poses a potential health risk.

A study in Scientific Reports looking at bushmeat eaten in the region around Tanzania’s iconic Serengeti ecosystem found that meat and organs poached from the area were associated with the zoonotic spill-over of dangerous pathogens.

Put simply, the local population had been exposing themselves to the risk of new pandemics and illnesses by eating bushmeat.

According to the World Health Organization, more than 50 per cent of the new infectious diseases in humans are caused by pathogens originating from animals or animal products, of which 70 per cent have originated from wildlife.

Similar studies have indicated that the handling and consumption of bushmeat contributes to the transmission of pathogens from animals to humans.

It’s an issue that concerns the Sheldrick Wildlife Trust CEO, who said: ‘Bushmeat hunting puts us at risk. Research indicates that human handling and consumption of bushmeat is linked to some of the most fatal [human] disease outbreaks in recent history, from HIV to Ebola.’

‘We don’t yet definitively know how Covid-19 jumped to humans, but we do know that the pandemic likely originated in wet markets, which are rife with bushmeat,’ she explained.