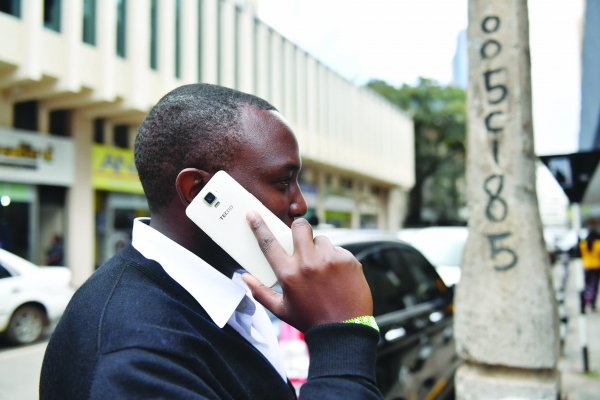 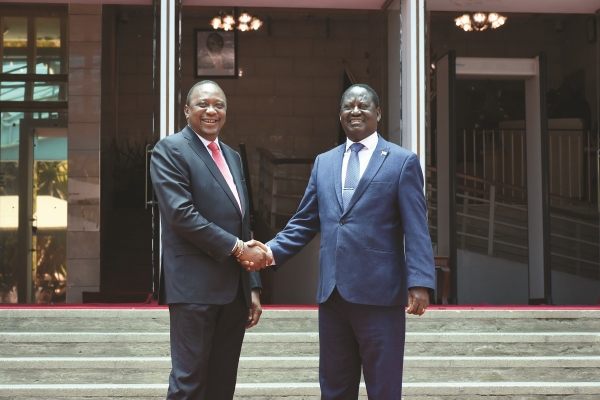 A surprise unity pact between Uhuru and Raila offers new hope for a divided nation.

handshake’ by political pundits – caught both friend and foe unawares, given that the two leaders had been at loggerheads since the hotly contested August 8, 2017 presidential election.The Independent Electoral and Boundaries Commission (IEBC) declared Uhuru the winner but Raila successfully petitioned the result in the Supreme Court of Kenya, which later nullified the election on grounds of irregularities.

Despite this, Raila – through his National Super Alliance (NASA) coalition – boycotted the re-run of the polls, arguing that IEBC had not done enough to make the elections free and fair. Turn out was low, just 36 per cent, as Raila’s supporters stayed away.  To make matters worse, a number of lives were lost following the confrontation between police and demonstrators.

Although Uhuru was declared winner again, the NASA coalition vowed not to recognise him as the duly elected president, citing legitimacy issues. When his calls for dialogue and electoral reform were rejected, Raila went ahead and had himself ‘sworn in’ as ‘the People’s President’ on January 30.

However, that is now all water under the bridge following the signing of a pact in which the two leaders committed to work together for the sake of peace and economic stability in what the joint communique referred to as “building bridges to a new Kenyan nation”. Among the key challenges to be tackled in the pact are ethnic rivalry and security.

“In the life of any nation, a time comes when the people and their leaders must audit the progress made towards the attainment of the goals and prayers laid out at the founding of the nation,” the communique reads. “The time has come for us to confront and resolve our differences. These differences are becoming too entrenched.  We refuse to allow our diversity to kill our nation. We refuse to be the leaders under whose watch Kenya slid into a failed nation,” it added.

The deal effectively puts an end to the tensions between the two leaders and by extension, the ruling Jubilee party and the NASA coalition. For Raila, it will help in thawing his relationship with the west, which had been frosty since August last year and included the threat of a travel ban by the   the US and the UK. It is also instructive that the Kenyan shilling strengthened by 10 Cents against the US dollar to trade at Sh101 while the Nairobi Securities Exchange (NSE) 20 share index gained 15.03 points to record 3734.89 points immediately after the two leaders read a joint communique on the steps of Uhuru’s Harambee House office, the venue of the historic meeting.

However, opinion is divided on why the two leaders decided to set aside their differences. One school of thought believes that both Uhuru and Raila wanted to right the wrongs committed by their two fathers, whose political differences following independence sowed seeds of discord between the Kikuyu and the Luo, two of the most populous tribes in Kenya.

Both Jomo Kenyatta (Uhuru’s father) and Jaramogi Oginga Odinga (Raila’s father) fought for the country’s independence. When Kenyatta was detained in 1952, the British colonialists wanted to hand over power to Odinga to lead the country to independence, but Odinga turned down the offer, insisting that Kenyatta must be released.  When Kenyatta became President he made Odinga his deputy. However, the two later had ideological differences that saw Odinga found an opposition party. The Kikuyu and the Luo communities have remained bitter political rivals ever since.

Other pundits argue that both Raila and Uhuru control substantial wealth in the country and deemed it necessary to call for a ceasefire since their businesses were suffering. Besides, the two wanted to be recognised as statesmen as they both prepare to exit the political arena. Uhuru is serving his second term and constitutionally will not be re-eligible for election. At 73 and after already making four unsuccessful bid for the top job, Raila may not run for president again. In any case, the NASA coalition agreement stipulates that Raila’s Orange Democratic Movement will not present a presidential candidate in the 2022 elections.

“Raila now believes that his years of struggle cannot be summed up in a legacy of intransigence,” said his close ally Junet Mohammed. “He needs to ensure that his gains are firmly embedded in the future life of the nation. Their challenge is of course their respective constituencies and their ability to whip them towards this new direction. Both have followers who are currently polarized by egos and ambitions.”

Still, there are those who see the US’ hand in the pact, coming as it did only a few hours before former US Secretary of State Rex Tillerson jetted into the country. Prior to his arrival, the US ambassador to Kenya, Robert Godec, angered NASA for repeatedly urging it to embrace dialogue and recognise Uhuru as the duly elected president.

Meanwhile President Uhuru, keen on securing his legacy, decided to reach out to his erstwhile friend Raila to help him realise his four pillars of development programme – universal healthcare, food security, affordable housing and infrastructure development – that he unveiled during his swearing in for the second term. With product boycotts and frequent demonstrations called by NASA, it would have been an uphill task to achieve them.

What cannot be gainsaid is that the coming together of the two protagonists has seen the opening of a new chapter in Kenya’s political scene. For the first time, the county will go to the polls without a presidential candidate from the Kenyatta or Odinga family, whose participation in the elections has always polarised the country.

“There is going to be a very serious realignment,” said Wiper Democratic Movement deputy leader Farah Maalim. Already, the senior Jubilee senior politicians who only a few months ago vilified Raila as a sore loser are now praising him as a statesman and speaking positively about the contributions he has made in the country’s democratic space, including fighting for the new constitution.

On the other hand, opposition politicians who wasted no time in describing Uhuru as a fraud who rose to the presidency through illegitimate means, are now hailing him as a wise leader who believes in dialogue. Of great significance is that the opposition politicians are now attending parliament regularly and contributing to constructive debate. Hitherto, they would only make technical appearances. They have also since joined the vetting of appointments committee, which they boycotted.

But the ultimate beneficiary of the ceasefire is deputy president William Ruto, who is set to take over the mantle from Uhuru, come 2022. Only Raila would have been capable of mounting a strong opposition to his bid. According to the pact signed between Uhuru and Raila, the latter will now access his benefits for the period he served as prime minister – 2007-2013 –  on condition that he quits politics. He is also set to be appointed special envoy of peace, with a fully-fledged office and a retinue of staff.

Even as the country breathes a sigh of relief, the meeting of the two leaders has caused a major rift in NASA, with the other three principals – Musalia Mudavadi, Kalonzo Musyoka and Moses Wetangula –  feeling betrayed by Raila after being left out of the negotiations.

“For the record, and on the basis of the statement released, I can categorically state that the meeting was between two individuals,” said an angry Mudavadi in a statement. “It does not bear the imprint of NASA summit as it ought to be. It was not processed through the NASA structures. Indeed, nowhere does the MoU allude to or mention NASA, including the signing off. Instead, the two repeatedly invoke their names and personally commit to each other and not to all Kenyans.”

Although the three NASA leaders have now sought an appointment with the president, it is highly unlikely that he will meet them, considering that both Uhuru’s and Raila’s handlers insist that the meeting was between the two “presidents” representing the interests of their respective supporters.

Whereas the peace deal between the two protagonists was brokered by their family members and a few confidantes, most of their lieutenants were left in the dark. For   his part, Uhuru did not involve Ruto in the talks and attended the meeting at Harambee House alone. Similarly, Raila did not involve his co-leaders and even his close allies were not at the meeting. Such an arrangement, however, is not new in Kenya. At the height of negotiations following the disputed 2007 presidential election that led to loss of more than 1,000 lives and displacement of 600,000 others, chief mediator Kofi Annan discovered that both President Kibaki’s and Raila’s hardliners were stifling negotiations. It is only after he locked out the die-hards that the two leaders reached a deal on the coalition government. It is probably because of this that Uhuru and Raila decided to meet alone.

By accepting to work with Uhuru, Raila has yet again confirmed that he is the enigma of Kenyan politics, a title used to describe him in his biography by Babafemi Badejo. After the 1997 election, Raila realising that the opposition had twice failed to dislodge the then ruling party KANU from power, dissolved his National Development Party and joined KANU (Kenya African National Union). He was promptly rewarded with a cabinet post and the party secretary general’s position. But he was later to destroy KANU from within when, in the run-up to the 2002 elections, President Daniel arap Moi nominated Uhuru, a political greenhorn at the time, as his heir apparent. Raila led a mass walkout from KANU and teamed up with the likes of the late George Saitoti, William Ole Ntimama and Kalonzo Musyoka to form the Liberal Democratic Party which later teamed up with Kibaki’s National Alliance Party of Kenya to form the National Rainbow Coalition. The latter handed Uhuru a humiliating defeat, ending KANU’s 40 years of stranglehold on Kenya’s politics.

For now, all eyes will be on the team appointed by Uhuru and Raila to fine tune the pact, whose other details they promised to release at an appropriate time.

Read more...
Solar wars heat up following German firm’s arrival into Kenya market.
Foreign affairs – As Ecowas chair, President Mahama has worked hard to pursue regional co-operation, particularly in the fight against Ebola and Boko Haram, thereby enhancing Ghana’s image    When the heads of state of the regional political grouping, the…
Digital breakdown – Millions are at stake in TV digital migration wars as the regulator sticks to its guns. By Zachary Ochieng, Nairobi IN A SITUATION reminiscent of the 1980s when the Voice of Kenya (VOK) was the only television channel in…
Subscribe to this RSS feed
0
0