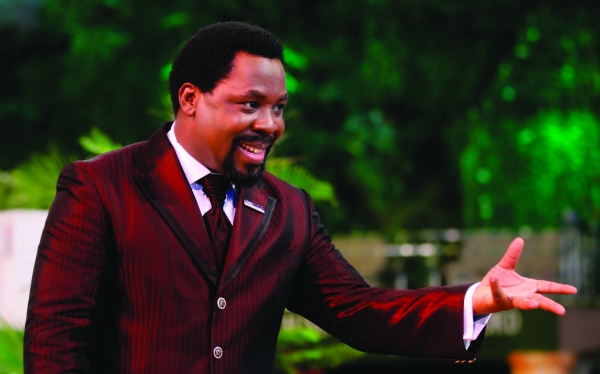 When Pastor Temitope Balogun Joshua (pictured) announced one Sunday in November 2012 that he would be  sponsoring a young woman’s PhD studies  at the University of Oxford to the tune of £100,000 (N26m), his congregation was left suitably stunned. However, it was not the first time the Synagogue Church Of All Nations (SCOAN) leader had given help to Yinka Oduwole. Previously he had sponsored her Masters degree in broadband communication at University College London after she achieved a first class honours  in electrical and electronic engineering at the University Of Lagos.

Today, Oduwole, having graduated in 2017, is already thinking global and developing broad shoulders to take up rare research challenges focused on finding a cure for cancer.

“I decided it was time to actually use some of these skills to develop innovative solutions to some of the world’s challenges,” she said. “I was particularly excited when I got an offer to carry out research  at the University of Oxford to use my electromagnetic skills to develop a bio-magnetic separator with potential applications in the medical industry.”

Describing the support from her Oxford colleagues as “overwhelming”, she added: “I have been amazed and thrilled to work with amazing talents in such a historic environment producing world class research that is affecting lives. I have been privileged to be part of such a great network of world changers and future leaders in every area of life .”

The evangelist, a self-styled prophet popularly known as Prophet TB Joshua  said that he chose to support her because he knew that he was sponsoring a leader of tomorrow.

However, it was just one among the numerous demonstrations of philanthropy that he has become famous for. Whenever the situation demands, you can be sure that he will be there to lend a hand in addition to spreading the good news of of salvation, healing and deliverance to people. And his good works are not just confined to Nigeria, or even Africa. For TB Joshua, the world is his oyster.

In Colombia, for instance, he donated the princely sum of $100,000 to the National Metropolitan Force in support of those who have been widowed, orphaned or wounded while in the service to their country. In Mexico, he purchased truckloads of items ranging from staple foodstuffs to essential utensils and tools to improve the quality of life of people in the Naha community in the Lacandon jungle.

The SCOAN general overseer, who is reputed to have three million Facebook followers, carries out his work with Emmanuel TV,  Africa’s largest Christian television network that he founded to broadcast his sermons and good works around the globe.

In Lahore, Pakistan, TB Joshua built Emmanuel School, an institution with a mission to provide free quality education for the less privileged of all faiths. He also gave $10,000 to the House of Love, an Indonesian charity offering help to the homeless in the port city of Surabaya.

Russia’s Open Heart Homeless in the Haborovski region, where frostbite claims the limbs of many as temperatures fall to below minus 30 degrees, received intervention from the pastor and his team in the form of an extensive winter relief programme.

Closer to home, in Ghana, TB Joshua donated vehicles, including an entire fleet of motorbikes, worth  $140,000, together with  helmets and reflective jackets, to support the security operations of the Ghana Police Service.

When the pastor heard about how lives were being ruined by drug abuse, prostitution, and alcoholism on the Flower housing estate in the UK city of Southampton, he teamed up with  the Flower Foundation to provide hampers of food, Christian literature and cash in the hope of alleviating the social isolation and poverty that lay behind the crisis.

Joshua’s humanitarian touch was extended to the richest nation on the planet, the US, where nevertheless many citizens continue to fall by the wayside.  Aside from providing equipment and supplies to protect residents against the freezing cold mountain weather, he presented $2,000 to Gary Miller, the founder of Mountain Ministries Ranch in Washington, to assist in his care of the men, women and children seeking refuge at his ministry. This is in addition to provision of essential items for the homeless in the snowy creeks of Colorado.

Over the years, the pastor and his team have been busy offering disaster relief in places as far afield as the Philippines following its devastating typhoon in 2013, and Ghana, when more than 250 people were killed in an explosion in a petrol station in 2015. Following the 2016 earthquake in Ecuador, he provided more than $500,000 worth of humanitarian aid.

In 2010, at least 100,000 people lost their lives in Haiti following the sixth most fatal earthquake of all time in January 2010. Rather than confine himself to prayers and sending messages of sympathy from Lagos TB Joshua and his Emmanuel TV team hit the country within 10 days of the disaster with a teams of medics, engineers and volunteer workers to help rebuild the nation. He chartered planes and worked with the United Nations to quickly deliver medical supplies, food and building materials.  Haiti’s president at the time, Rene Garcia Preval, made a point of meeting with  Emmanuel TV to express appreciation for the support that had been given, as did the Mayor of Arcahaie.

When the ebola epidemic struck Sierra Leone in 2014, TB Joshua made a cash donation of $50,000 to take care of victims. He also loaded a chartered plane with his Anointing Water, which he says can heal people of disease.

Pallam village, Andra Pradesh, India, was ravaged by fire in 2012, turning the entire place to ashes. As a result more than 2,000 people were made homeless. Joshua immediately sent the Emmanuel TV team to the remote area with thousands of bags of rice and substantial financial support.

Like Yinka the student, Vera Benjamin benefited directly from the pastor’s charity. Benjamin travelled from Nigeria to make a new life in Greece, where she had been promised work. However, like many young Nigerian whose trip overseas was financed by strangers posing as friends, she had been duped. When she got to her destination she was forced into prostitution to pay off the money she had paid to human traffickers. Incredibly, Vera managed to escape from her captors and make her way back to Nigeria. Once there, she approached SCOAN where she was given $3,000 to get back on her feet.

The outreach programme of the ministry in Nigeria is best summarised by Joshua himself: “When you see your contribution to others as an assignment from God, that is when your contribution can solve problems.”  He is not interested whether the beneficiaries of his work are Christian or not. It is sufficient that they are people and in need of help. It is with this spirit that he has given $20,000 those who have ended up in a displaced peoples camp in Abuja following attacks by Boko Haram. His team also visited communities in Borno, Yobe and Plateau State where millions of naira and thousands of bags of rice were donated to other victims of the insurgency. The Emmanuel TV team  intervened in a predominantly Muslim farming community in Ondo State with financial assistance and food. A school for the blind in Owo community in the state has also been presented with a cash gift.

Gidikanu, a home for the needy in the Agege area of Lagos, was in dire need of help. A cash gift of N300,000 was given alongside  trailer loads of rice. Similar generosity was shown to a refuge for the destitute and disabled in Alagbarago slum in the town of Ojo, Lagos State. Prophet Joshua told them: “You are our neighbours; we feel what you are feeling. That is why we are here today. We love you and Jesus loves you.”

TB Joshua spends time and resources to people from all walks of life, from criminals in need of rehabilitation to the disabled who require basic aids like wheelchairs.

The stories are endless and explains why Joshua is one of Africa’s most popular preachers, with vast congregations and, via Emmanuel TV, a YouTube presence of more than 300 million views.  A multi-millionaire, he certainly puts his money where his mouth is, saying, ‘If your Christianity is measured by the extent of your love for God and your fellow brothers. Measure your life by your love.’