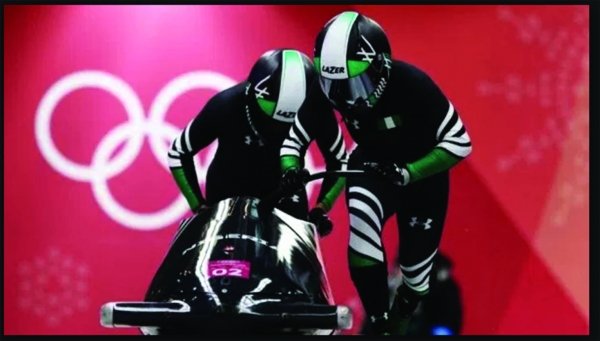 Unlike the globally-embraced summer Olympics, the winter version rarely attracts any significant following among Africans. A major reason for this is that Africa does not have much snow and ice outside the highlands of Kenya and Tanzania.

Even though a handful of athletes from a few countries on the continent – Kenya, Morocco, Ghana, Madagascar, Senegal, South Africa and Togo – had previously made a foray into the winter Games, the big stir surrounding the participation of Africans in the 2018 edition in Pyeongchang, South Korea, seemed unprecedented.

Perhaps no other set of African athletes captured this more than Nigeria’s female bobsled team, comprising Seun Adigun, Ngozi Onwumere, and Akuoma Omeoga. Reportedly, their winter Olympic dream started when Adigun, who represented Nigeria at the 2012 London Olympics in the 100m hurdles, got what she described as “Olympic fever” again after watching the winter Games in Sochi in 2014. “I knew quite a few track and field athletes who had transitioned into the winter sports so I figured, ‘You know, I think I could try this’,” she told CBC.

Her first step was to build a wooden sled in her garage in Houston, Texas. The next was to convince Omeoga and Onwumere, her two friends also based in Houston, to jump on board.

To fund their quest for history, they set up a GoFundMe page and after appearing on Ellen DeGeneres’ TV talk show, the bobsledders started getting sponsorship. They had their efforts crowned in November 2017 by qualifying for the games in Pyeongchang.

Less than a year-and-a-half after deciding to give this niche sport a go, Adigun, Omeoga, and Onwumere slid down one of the trickiest tracks in the world over four heats, finishing last each time, averaging 3.5 secs behind the German leaders in a sport that measures success and defeat in  hundredths of a second.

Although the Nigerian women did not win any medals, they cemented their names in the record books as the first Africans to bobsled in the Olympics. Not even Muhammadu Buhari, the Nigerian president, could not resist becoming involved, saying he would personally host the trio at Aso Rock, the seat of government in Abuja.

For the bobsled team, the carnival-like reception that greeted their arrival in Nigeria after the Games was a sharp contrast to their anonymous beginnings. Speaking to the News Agency of Nigeria, Adigun said: “We are from a continent that would never imagine sliding down ice at 80 or 90 mile per hour. The whole idea of getting people to take to that in itself is empowering.”

Omeoga added: “We are also inspiring athletes to come back to Nigeria to serve their country [as we did]. Just because you are not born here does not mean you cannot do anything to represent your country and take pride in it.”

The major goal of featuring in the winter Olympics, said Onwumere, was to propel Nigeria into a positive light and let the world know that Africans can do amazing things.

Despite their achievement, most people think the prospects of African athletes mounting the winners podium at the next winter Olympics look slim in the absence of  official government support. All the Africans that participated in South Korea were either born or raised outside the continent.

Adigun, Onwumere and Omeoga had to set up a national bobsled and skeleton federation in order to be able to compete. They were following the example of Robel Teklemariam who established Ethiopia’s skiing federation before taking part in the 2006  winter Olympics, and Lamine Guèye, who set up set up Senegal’s ski federation in 1984.

For all his praise for Nigeria’s bobsledders, Solomon Dalung was noticeably tight-lipped on the government’s plan to support the athletes in future tournaments.

Also attending the winter sports fest was Simidele Adeagbo, who became the first Nigerian woman to participate in skeleton, which has been likened to hurtling down an ice track on a tea tray. Adeagbo finished her trailblazing debut with the third best start time and 20th place overall. She went on to lead the Nigerian team as flag bearer in the closing ceremony.

“My Olympic journey has shown me that there are no limits to what’s possible and that I can make a significant difference in the world,” she said.

She joined the three bobsledders on a triumphant return to Nigeria where President Buhari held a special reception for them, as promised.