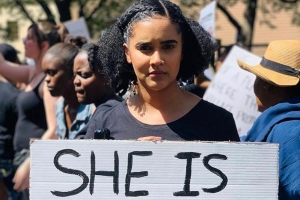 Even by South African standards, the headlines have been chilling: ‘You left me no choice but to kill you,’ read one.

‘KwaZulu-Natal resident living in the shadow of a serial killer,’ screamed another.

But while violent crime has become part of everyday life in South Africa, and rape something many women expect to happen to them at some point in their lives – four in every 10 South African women will be raped at least once in their life – the scale and brutality of the attacks during lockdown have caused shock.

In the first three weeks after the stay-at-home order was announced, there were 120,000 anti-female crimes in the country, according to the government agency tasked with recording gender-based violence and femicide.

It cited ‘economic vulnerability’ as one of the key factors driving the rise.

‘Gender-based violence statistics have always been quite high and higher than the global average. I think it’s quite evident right now that our government still doesn’t know how to deal with it.’

The campaigner, who has written numerous articles on gender-based violence, commended the government for a recent legal amendment to address crimes against women, but said it didn’t go far enough.

‘Their response when it comes to gender-based violence is lacking and the police response is also lacking.’

A victim of rape and domestic abuse herself, Pypers said that the government needed to address the increasingly low conviction rates of gender-based violence and added that children should be taught about consent from a very young age.

‘[The fact that] only three per cent of perpetrators are actually prosecuted is worrying,’ said Pypers, referring to arrest reports on the period in question.

'Before the lockdown, the conviction rate for rape was around 14 per cent.

‘We need to educate young boys and girls in the country on consent and what gender-based violence is and to teach them that love is not harmful.

'Love does not hurt, being in a relationship does not hurt. A lot of the survivors of gender-based violence are attacked by people they know.

The familiarity between victim and attacker may go some way to explaining the country’s low conviction rate for gender-based violence.

Only 130 of the 4,058 people arrested for alleged gender-based violence since the announcement of the lockdown in March have been convicted, according to police minister Bheki Cele in parliament.

Colette Solomon, director of the Women on Farms Project (WFP), said that the low conviction numbers reflect the general trend in the country, where rape is generally under-reported, and arrests and convictions are unacceptably low.

Solomon believes that while more women are reporting rape, this is still only a fraction of the actual number.

‘Women are discouraged from reporting rape because of systemic failures of the criminal justice system, which arrests and convicts only a small proportion of perpetrators,’ said Solomon, whose NGO has been studying recent and historical attacks of women in the country.

She believes that the problem is particularly bad in rural areas.

'Police are usually unable or unwilling to drive out to farms.

'There are also poorly trained police officers, including often a shortage of women police officers. And most rural police stations don’t have private and safe rooms for victims reporting rape,’ said the WFP director.

Solomon also identified a lack of support services, such as counselling in rural communities, and said rape cases are routinely postponed which makes it expensive and difficult for women to travel repeatedly from farms to courts. (Most rural courts don’t have specialised Sexual Offences Courts.)

Speaking in parliament, the police minister acknowledged that some members in the police force do not take rape seriously.

‘One thing we accepted is that sometimes our own police do shoddy work, but that is an improvement we are trying to do,’ said Cele.

He said that cases are often opened, and then withdrawn. ‘You find that families and friends put pressure on the abused women, especially if the perpetrator is a relative or a father, uncle or known boyfriend.

'Families tend to tell the victim that ‘you are bringing embarrassment to this house’ or ‘who is going to take care of us if the uncle or father gets arrested’.’

Cele encouraged the public to report police members who failed to execute their job.

He also promised that disciplinary actions would be taken against officers where necessary.

Such assurances from the police have done little to tamper public frustration, with protesters taking to social media sites to campaign against the issue.

Not everyone is convinced the lockdown has exacerbated the problem to the extent the figures suggest.

GBV and femicide psychologist Dr Karin Walton said the violence is ‘not something new’ although she welcomed the fact that both the authorities and campaigners were raising ‘a lot of awareness’.

In 2019, more than 52,000 sexual offenses and almost 42,000 rapes were reported to the police, according to official statistics.

‘I think it is actually just consciousness raising because these are things that have been happening for a very long time,’ said the psychologist.

‘Women and girls have always disproportionately been kind of the victims.

'So, I don’t necessarily believe we are under attack as such now, it is just that we are much more aware of incidences and that has a lot to do with how we have the ability to now quickly communicate with one another and share experiences on social media.’

She argues that the violence is driven by power relations that have been in the country for a very long time and cited increased competition for jobs as one of the main reasons for South Africa’s gender violence problem.

This increased competition for work resulted not just in many of the country’s racial problems – the apartheid government was famously elected over poor whites’ fears over ‘cheap’ black labour – but also its long history of gender violence, according to Walton.

‘If I am living in poverty and I lose my job and things are not going my way,’ said Walton, channelling the rationale of resentful unemployed men, ‘it’s not necessarily that I am looking for someone to blame for it, although sometimes I can, especially when I lost it to a woman.

Job insecurity has increased dramatically during the Covid-19 pandemic, with more than 2.2 million jobs lost during the second financial quarter thanks to the country’s lockdown, tourist ban and prohibition on alcohol and cigarette sales.

GDP, meanwhile, more than halved in the same period, and many of the country’s restrictions have yet to be fully lifted.