The government says John Magufuli died of heart problems, but questions abound over what really happened to the 61-year-old, who had a doctorate in chemistry and warned against devastating Covid-19 lockdowns in Tanzania.

After spending the last year disputing the global narrative about Covid-19, lockdowns and vaccines, Tanzanian President John Pombe Magufuli was pronounced dead from a heart attack on March 17 at the age of 61.

The official announcement came on March 17, when Vice President Samia Suluhu Hassan disclosed Magufuli’s death to the nation during a television address.

‘Dear Tanzanians, it is sad to announce that today 17 March 2021 around 6pm we lost our brave leader, President John Magufuli, who died from heart disease at Mzena hospital in Dar es Salaam where he was getting treatment,’ proclaimed Hassan.

Hassan said Magufuli had been admitted to the hospital on March 6 but discharged the next day.

A week later, he was taken in again for his heart condition, which Hassan and government authorities have insisted was the cause of his death.

Magufuli made headlines for defying the global narrative and response to Covid-19 since the virus was found in Tanzania.

He rejected closing churches and businesses, calling on people to pray to God instead of being afraid.

Contrary to the majority of the Western world and other African nations who have seen their economies collapse and other health conditions spiral out of control after embracing Chinese-style lockdowns, Magufuli declined to lock the country down, and the country has not reported any information about Covid-19 to the World Health Organization (WHO) since April 29, 2020.

In June, Magufuli declared that the country had eradicated the virus.

Nor is this the only way that Tanzania’s former president is likely to have angered globalist politicians.

After Covid tests yielded ‘positive’ results from a goat and a pawpaw, Magufuli rejected them as unreliable, saying they had ‘technical errors’. His words have since been supported by an independent group of 22 scientists, who identified ‘10 fatal problems’ with the widely used PCR tests, noting that each problem on its own was enough to render the tests ‘useless’ in identifying Covid-19.

Magufuli, who had a doctorate in chemistry, also warned Tanzanians against becoming ‘guinea pigs’ for the various experimental Covid vaccinations, saying: ‘If the white man was able to come up with vaccinations, then vaccinations for Aids would have been brought, tuberculosis would be a thing of the past, vaccines for malaria and cancer would have been found.’

He was replaced by Hassan, who was sworn in March 19 with her hand on the Koran.

She will serve the remainder of Magufuli’s five-year term, which began in November 2020. 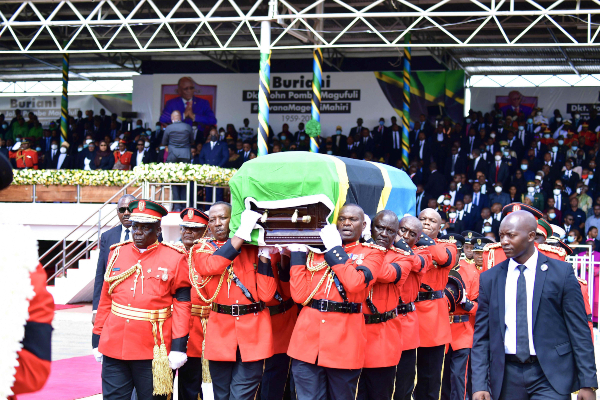 After Magufuli had disappeared from the public eye for a number of days, by March 11 rumours surfaced that he had died.

Then by March 12, the rumours intensified, with a number of social media posts and media reports claiming he had died.

Opposition leader Tundu Lissu claimed that Magufuli was being treated for Covid-19 and flown to Kenya and then to India for treatment.

However, this was ardently denied by government sources.

By March 13, Magufuli was still missing, not having been seen since February 27, and rumours were running amok.

Chahali wrote that the president had been put on life support in order to prevent Vice President Hassan from announcing his death and assuming power.

The attempted coup was being orchestrated by a group called ‘Lake Zoners,’ Chahali wrote, which was looking to place General Venance Mabeyo in Magufuli’s place.

The official announcement rejects Chahali’s assertion, however, and the government narrative remains that Magufuli died March 17.

Aside from confusion and secrecy surrounding the date, the leadup to his death was marked by growing international pressure on Magufuli to change his response to Covid-19.

At the start of February, the country’s health minister once again refused to accept any Covid vaccinations, prompting the World Health Organization to increase its pressure on the country to rejoin the fold and take part in the organization’s response to the infection.

WHO Director-General Tedros Adhanom Ghebreyesus issued a statement urging Tanzania ‘to scale public health measures against Covid-19 and to prepare for vaccination’.

Describing the situation as ‘concerning’, he reissued his call for Tanzania to take part in the global vaccination rollout, demanding Tanzania implement the public health measures that we know work in breaking the chains of transmission’.

Then, just one day after the Director-General’s statement – and in the wake of the death of Maalim Seif Sharif Hamad, the first vice president of the semi-autonomous Zanzibar region – Magufuli signalled a slight change in policy and commented on the use of masks, and acknowledged the presence of the virus.

‘I have not said people should not wear facemasks, don’t misquote me, however, some facemasks are substandard, if you have to wear them, please consider those locally made,’ he said.

‘Most people who have been affected are in urban areas. We will defeat this virus by faith.’ 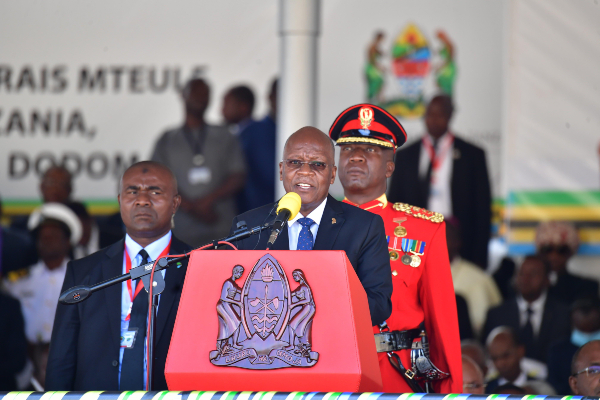 Some days before, on February 8, an article appeared in the left-wing British newspaper The Guardian attacking Magufuli’s response to Covid, calling it ‘a danger to public health’ and calling for Magufuli to be reined in.

The op-ed claimed that the president was ‘fuelling denialism and conspiracies’, and ridiculed his rejection of lockdowns and mask wearing.

The article was sponsored by the Bill and Melinda Gates Foundation, which invests and makes billions of dollars on the global vaccination drive. The Foundation, along with the WHO, has been accused of profiting from DTP vaccines in Africa, which some scientific studies have alleged led to more deaths than the diseases they are supposed to protect against: diphtheria, tetanus and pertussis (whooping cough).

In an attempt to curry favour with the liberal movement, Melinda Gates proclaimed last June that the experimental Covid-19 vaccines should be given first to ‘black people’ and ‘indigenous people’ in America.

Certainly, in the run-up to his death, Magufuli faced the renewed wrath of both Bill Gates and the WHO, who took issue with his rejection of their lockdown and vaccination measures.

It remains to be seen what further details will emerge to shed light upon Magufuli’s death after he disappeared from public view for 18 days before he was announced to have died at just 61.

His successor, Hassan, praised Magufuli in her swearing-in ceremony and called for unity and an end to ‘finger pointing’.

Hassan, who previously worked for the United Nations’ World Food Program, was warmly welcomed to her new role by the WHO Director-General, in a marked change of tone from his previous comments to Magufuli, saying: 'I look forward to working with you to keep people safe from #COVID19, end the pandemic and achieve a healthier Tanzania. Together!’

This article was originally published on LifeSiteNews.com and has been edited for NewsAfrica Magazine.