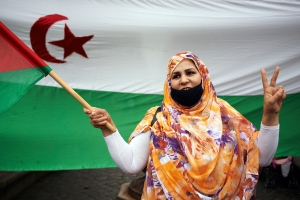 After Donald Trump recognised Morocco’s claims over the disputed region, Andrea Dijkstra looks at what the future holds for Africa’s ‘last colony’.
The future of an independent Western Sahara has been thrown into doubt, after outgoing US president Donald Trump officially recognised Morocco’s sovereignty over the former Spanish colony in exchange for Morocco’s recognition of Israel.
Claimed by neighbouring Morocco after Spain left in 1975, the disputed region’s native Saharawi people fought a 16-year war with Morocco which only ended in 1991 after a UN-brokered cease-fire promised a referendum on the future of the territory.
Twenty years on from the end of the conflict, though, and all attempts to organise a vote have been systematically sabotaged by Morocco, which has continued to populate the region with its own settlers.
Trump’s announcement further complicates this situation, according to Abdy Yeganeh, from Independent Diplomat, a non-profit group supporting peace efforts. ‘This high-profile recognition from the US strengthens the status quo of Morocco being the dominant power on the ground,’ said the former British diplomat.
‘This will make the kingdom even less willing to cooperate with the already stagnated peace process.’
Since 1991, Morocco has controlled about four-fifths of the sparsely populated desert region, which is around the size of Britain. It is home to less than a million people but has fish-rich Atlantic waters, phosphate deposits, potential oil reserves and Morocco’s only working land route into the rest of Africa, as its border with Algeria is closed.
The UN – which deployed over 400 personnel in its Mission for the Referendum in Western Sahara – said its position is ‘unchanged’ despite President Trump’s decision.
‘Recognition will not simplify the territory’s complicated status, as it is still designated by the UN as a ‘non-self-governing territory’,’ explained Hamish Kinnear, North Africa risk analyst at Verisk Maplecroft.
This view was echoed by Riccardo Fabiani, from International Crisis Group, who added: ‘Morocco is also very far away from having its claims recognised by the rest of the world.’
However, there are fears that Trump’s announcement could trigger an escalation of the conflict, according to Yeganeh, of Independent Diplomat.
Just one month before the US’s recognition, the 1991-ceasefire had collapsed after Morocco sent troops into an UN-patrolled buffer zone to reopen the road to Mauritania which had been blocked by a group of separatists.
Close to 200,000 Saharawi refugees continue to live under harsh conditions in camps along the border. Thousands more have been tortured, jailed and killed for resisting the occupation since the 1970s.
In Freedom House’s annual ranking, Western Sahara is listed as the fourth-least free territory in the world — just one point above North Korea.
‘A growing number of young pro-independent Saharawi’s are frustrated with their political leadership as the peace process didn’t lead to anything,’ explained Yeganeh.
‘On top of that, Trump’s announcement has caused a lot of anger and could spark people to go back to a violent solution.’
Whether conflict returns to the region, though, depends largely on neighbouring Algeria, which has historically provided backing to the pro-independence Polisario Front and is home to around half of the displaced Saharawi population.
Meanwhile, Donald Trump’s former Secretary of State, Mike Pompeo, said the US still favoured a diplomatic resolution for Western Sahara.
And his former national security advisor John Bolton even called on incoming president Joe Biden to reverse the recognition.
‘Trump’s decision to throw the Sahrawi people under the bus ditches three decades of US support for their self-determination via a referendum,’ the Republican diplomat wrote in a comment on the American Foreign Policy news site.
However, the question arises whether this decision can so easily be reversed as it was part of a deal with Morocco to normalize relations with Israel.
‘The Biden administration could undo the recognition,’ explained Riccardo Fabiani, of the International Crisis Group. ‘But that would risk undermining the Morocco-Israel diplomatic normalisation.
‘It's unlikely that Biden will want to jeopardise a diplomatic development that is favourable to Israel.’
The US has already started the process of establishing a consulate in the Moroccan-held region, after Bahrain and the United Arabic Emirates did the same last year as part of wider US-Israeli diplomatic efforts.
Some 20 countries, mostly African and Arab nations, have opened diplomatic offices within Moroccan-administered territory, but the Polisario Front considers such moves to be violations of international law.
Experts warn that the international community should put higher priority to Western Sahara as a return to violence could destabilize the whole region.
Western Sahara borders regions where a disparate Islamist insurgency has taken root in recent years.
‘Instability in the region is fuel to extremists,’ said Yeganeh. Western Sahara is also a jumping-off point for migrants from sub-Saharan Africa who risk the dangerous sea crossing to Europe, especially to Spain’s Canary Islands.
According to the former British diplomat: ‘The international community, and especially Europe, therefore should quickly find a credible solution for Western Sahara before this situation further escalates.’
Read more...
Subscribe to this RSS feed