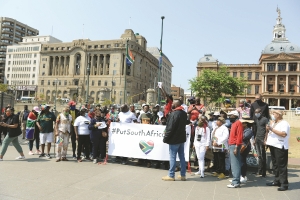 Donald Paul reports from South Africa on the street protests and anti-migrant laws targeting Nigerians and other foreigners.

Back in May 2008, South Africa’s status as the so-called Rainbow Nation was hanging by a thread.

The townships were ablaze, foreign-owned businesses had been looted and thousands of migrants – specifically those from other African countries, as well as people from Pakistan and Bangladesh – had been forced to flee their homes.

The xenophobic violence spread to Cape Town, and the world watched in horror as clouds of thick black smoke rose against the iconic Table Mountain.

Gangs of South African youths rounded on migrants from Zimbabwe, Somalia and Nigeria, among others, for ‘taking jobs’ and being ‘responsible’ for the rise in crime. Sixty-two people were killed, of which 41 were immigrants.

The repeated official line from law enforcement that the violence was criminal-driven and not xenophobic implied that the government was not taking it seriously.

The year ended with the then president Thabo Mbeki being recalled by the ruling African National Congress (ANC) and the country collectively shrugged its shoulders and carried on as before.

Life did not get any easier for foreigners (or locals, for that matter).

By 2019, with an estimated four million immigrants, South Africa was the largest home for immigrants on the continent.

True to form, the government launched what it called a ‘National Action Plan to Combat Racism, Racial Discrimination, Xenophobia and Related Intolerance’.

Like most government projects, it was soon bogged down with endemic bureaucratic malaise.

According to a report released last month by Human Rights Watch, the xenophobia never went away.

It linked attacks on truckers between 2018 and 2019 with the problem.

Almost 200 truckers were killed during the period and numerous vehicles torched.

But critics have claimed that the president played up to ‘xenophobic populism’ during his 2019 election campaign.

The non-profit organisation Right2Know, launched in 2010, even went so far as to blame the South African government explicitly for the xenophobia.

Fast forward to today, and once again xenophobia has surfaced, this time with the added value of social media.

Over the past six months, a concerted campaign – mostly conducted on Twitter and Facebook – began amplifying the xenophobic populism.

The messaging taps into one of the country’s most critical socio-economic problems: unemployment.

The Quarterly Labour Force Survey released in June stated unemployment in South Africa increased to 30.1 per cent in the first quarter of 2020.

The demographic most affected are young people aged 15–34 years – more than 63 per cent are unemployed.

The messages from @uLerato_pillay are regularly re-tweeted by the African Transformation Movement (ATM), whose head of policy and strategy, Mzwanele Manyi, is a former ANC government spin doctor.

ATM, a fringe political party whose manifesto is ‘Put South Africans First’, along with a group calling itself ‘Action For Change’ was behind the protests in September outside the Nigerian High Commission in Pretoria and the Nigerian Consulate in Johannesburg.

Nigeria recalled its high commissioner to South Africa, Kabiru Bala, in response to the violence and wild accusations levelled during the protest, accusing Nigerians of being ‘drug lords and rapists’.

Jean le Roux, a research associate with the Digital Forensic Research Lab, who is based in South Africa, has tracked the anonymous @uLerato_pillay Twitter account for two months

He wrote in a report that the Twitter account ‘belongs to Sifiso Jeffrey Gwala, a former lance corporal with the 121st SA Infantry Battalion, in KwaZulu-Natal.’

Le Roux pointed out, the Tweets ‘bubbled to the surface of mainstream media outlets’ and amounted to ‘reckless political opportunism’.

The ATM and Action for Change distanced themselves from the account.

Ramaphosa, hosting the World Economic Forum on Africa at the beginning of September, said the nation was committed to stopping the attacks.

Nevertheless, Nigeria, Rwanda, and Malawi pulled out of the conference and talks about developing intra-African trade seem to have stalled.

To add fuel to the fire, the province of Gauteng, which is home to Johannesburg and Pretoria, proposed a new law that would reserve certain economic activities in townships for South African citizens.

Drawn up by the provincial premier David Makhura’s office, the draft Gauteng Township Economic Development Bill does not specify which economic activities, but critics argue it plays into the xenophobic populism and fits in with Justice and Correctional Services Minister Ronald Lamola’s call last year for ‘tough legislation’ against foreign nationals operating in the townships.

Foreigners are reluctant to comment for fear of being singled-out.

Most told NewsAfrica, however, that the mood in the country was tense, and that they did not expect the government to provide much relief in the foreseeable future.

And with the municipal elections scheduled for 2021, fears are that politicians are likely to ramp up the xenophobic populism.